When neonates enter the NICU, frequent blood tests have become an integral part of disease diagnosis and treatment.

Neonates have a low blood volume of their own, range from 50-100ml/kg (average 85ml/kg) for normal neonates and 89-105ml/kg for preterm infants. For example, a full-term infant with an average birth weight (3.3kg) has a volume of only about 280ml. In addition, the peripheral circulation of newborns is relatively poor and the blood viscosity is comparatively high, so the clinical situation of insufficient blood collection volume and difficulty in blood collection requiring repeated needling often occurs.

Do not disregard testing for blood loss.

Iatrogenic anemia due to test blood loss can increase the possibility of infection, cardiovascular and respiratory diseases, prolong hospitalization, and affect disease prognosis.

A study showed that the average total test blood loss during hospitalization in NICU children was 21.4 ml, an average of 6.1% of total autologous blood. Of all children in the NICU, 61.3% lost more than 5.0% of their autologous blood weight.

Children often have tissue and organ dysfunction, complicated by electrolyte and acid-base balance disorders, so among them, liver function, renal function, cardiac enzymes, blood glucose, and electrolytes play a very important role and are routine check-ups for children in NICU.

Studies have showed that 31.49% test blood loss is used for biochemical tests, ranking first in the amount of blood used for all tests.

Biochemical tests accounted for 14.46% of the total number of blood collections, which is the third highest. This demonstrates that the amount of blood used per biochemical test is relatively high, about 2 ml/time.

Mnchip reagent discs adopt microfluidic technology. The colorimetric holes around the discs replace the cuvette of a conventional blood chemistry analyzer, with a single volume of only 12μl (using only about 2μl of blood), which greatly reduces the amount of blood needed for the reaction compared with traditional blood chemistry analyzer. At the same time, multiple parameter indexes are integrated on one reagent disc. It is possible to achieve simultaneous testing of multiple indicators in micro blood by adding 100μl of blood sample at one time. 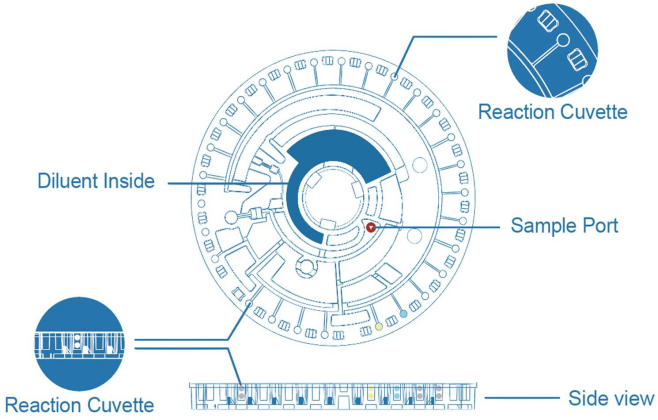 At present, the Mnchip automated chemistry analyzer has been used in the NICU, and paediatric departments of many tertiary and secondary hospitals, providing doctors with rapid and accurate test results while significantly reducing the potential risk of iatrogenic blood loss.